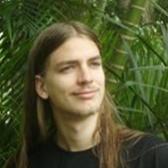 Diplom Biologist, studied systems and synthetic biology at the Universities of Potsdam, Copenhagen (DTU) and Freiburg. During his thesis he invented a novel contraceptive method based on genetically altered lactic acid bacteria. He worked as a consultant for the office for Technology Assessment by the German Parliament on biohacking and synthetic biology. Since 2014 he works for the Institute for Technology Assessment and Systems Analysis at the Karlsruhe Institute for Technology on the EU program Synenergene.

Trojok has been involved in frugal innovation in the Do It Yourself biology scene since 2009. He operates his own molecular biology laboratory and has conducted a number of molecular biolody experiments using low cost and household equipment. His work has been featured in german media and is displayed in art galleries and academic venues across Europe, among them the Ars Electronica Center in Linz. His latest research project is Bioflux on Digital Biology, aiming to automate and integrate biological laboratory procedures on a computer controlled chip. He is currently establishing a citizen science biolab in Berlin, and is supporting open-source biotechnology projects related to public life, politics and the arts.