Report on the public event "Synthetic Biology: Bioreality and Biofiction" in Ljubljana (December 2016) 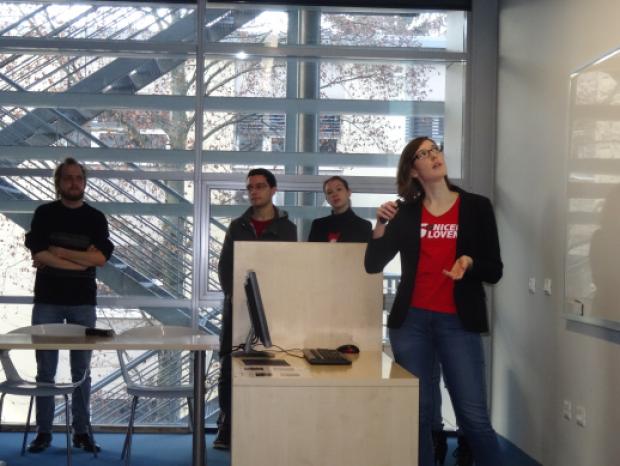 Report on the public event "Synthetic Biology: Bioreality and Biofiction" in Ljubljana (December 2016)

On Friday, December 9th 2016, a multimedia event for the general public titled "Synthetic biology: bioreality and biofiction" took place at the Faculty of Social Sciences in Ljubljana in the scope of the EU 7th Framework programme "SYNENERGENE: Responsible Research and Innovation in Synthetic Biology" project. The event was organized by the Centre for Social Studies of Science and the Slovenian unit of the international UNESCO Chair in Bioethics at the Faculty of Social Sciences, under the guidance Prof. Franc Mali and Prof. Toni Pustovrh, and together with one of the project partners, the Austrian company for research and science communication, Biofaction KG. The organization of the event was also supported by the project partner Karlsruhe Institute of Technology - Institute for Technology Assessment and Systems Analysis. The event was attended by about 40 people, made up of a mixed audience of researchers, experts, policymakers, artists, students and interested individuals, primarily from Slovenia, but also from neighboring countries, such as Croatia, Austria, Serbia and the Czech Republic. The event was conducted in English due to the linguistically diverse audience.

The event was introduced by Prof. Toni Pustovrh, with a short presentation of the objectives of the event, that is, of raising general awareness among both the expert and the wider public about the development, potentials and challenges in the field of synthetic biology, and of promoting communication, dialogue and public debate regarding this transformative field.

Kim Turk, MSc., from the Ministry of Education, Science and Sport presented on "Why funding organizations support communication of synthetic biologists with the public?". She stressed the importance of communicating with the public and of adapting the content to the target audience. At the same time, the lack of education in science communication and public speaking represents a serious deficit in higher education, especially the natural and technical sciences sector. In this regard, she pointed out the ERA CoBioTech project within Horizon2020, which distinctly emphasizes the communication element - also in the currently open call for R&D projects "Biotechnology for a sustainable bioeconoy".

The interdisciplinary Slovenian team, which has, under the leadership of Roman Jerala, attained the prestigious first prize in the category of Foundational advance at this year's world iGEM (international Genetically Engineered Machine) competition in Boston from among a record 300 teams from all around the world, showed us an example of good practice in terms of communicating research results to the public. They presented their project "Sonicell", with which they have increased the response speed of genetic "circuits" in a cell to stimulation with ultrasound, which could enable faster development of applications for the release of drugs or other substances e.g. directly in the body, while they also cooperated with experts in medicine, social sciences and other fields while studying the wider implications of their project.

In a brief presentation on the "Societal challenges and opportunities of synthetic biology", Toni Pustovrh and Franc Mali talked about what a social science approach to the study the ethical, legal and societal aspects can contribute to a responsible and societally desirable development of synthetic biology and what challenges ignorance and misunderstanding of the area among the wider society presents. More speculatively, he touched on the potential uses of synthetic biology applications for the purpose of improving or enhancing the capabilities of averagely healthy people, including in the field of healthy longevity, physical and mental abilities.

In the second part, which was dedicated to "biofiction", Jurij Krpan, the Curator of the Gallery for Contemporary Investigative Arts Kapelica ("Chapel"), used his lecture on the "Prospects of Singularity" to outline some art projects, which are dealing with the post-humanistic imperative of balancing the human presence in the Earth's ecosystem, and in which artists, scientists and engineers are collectively experimenting and creating on the edges of the thinkable by using technologies and biotechnological protocols.

This was followed by the mini film-art event "BIO•FICTION@Ljubljana 2016", which for the second year in a row presented the Slovenian audience with a selection of award-winning short films that incorporate and interpret synthetic biology, as well biotechnology in a broader sense, in a variety of ways, including the related prospects, dilemmas and societal issues. It was held as part of the international science, art and film festival BIO•FICTION at Vienna, which is organized by the company Biofaction KG. During the hour-long screening, the short animations and films touched on topics such as new practices and projects, the possibilities of environmental and waste bioremediation, (self)quantification and healthy lifestyle promotion, the potential risks of the mass engineering of plants and animals, the challenges of longevity, changed societal conditions, modes of activity and relationships due to new applications, etc. The film screening was followed by a short panel discussion on the integration and importance of science and art in contemporary society.

The event has thus successfully brought together experts from disciplinarily very diverse areas, who jointly discussed some of the current issues and challenges in the field of synthetic biology, biotechnology, applications, art and societally desirable progress with the wider public.

We also sincerely thank Anja Kolak, MSc., for professional assistance with the organization and the logistical aspects of the event.