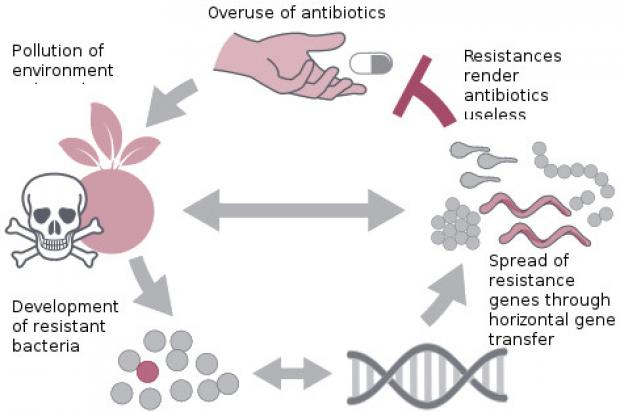 There are microbes all around us and everywhere on the planet. They are constantly interacting and competing, surviving and evolving. Some microbes produce compounds that are toxic to other microorganisms, and these compounds can be used as antibiotics in medicine. The microbes and antibiotics are different all over the world and also depending on what the microbes are growing on. In the 1940ies of the last century, biologists have learned to make use of antibiotics for medical purposes. Since then they have saved millions of lives and considerably contributed to the prolongation of human lifespan all over the world.

However, many microbes have evolved new mechanisms to withstand these once powerful medicines. An overuse of the available antibiotics and subsequent evolutionary pressure led to the development of multi-resistant bacteria. By now, the situation is becoming urgent, as very few effective drugs are left to treat infections.

The European Centre for Disease Prevention and Control estimates that antimicrobial resistance (AMR) results each year in 25,000 deaths and related costs of over € 1,5 billion in healthcare expenses and productivity losses. Globally multiresistant Tuberculosis causes 450,000 new infections annualy, common antimicrobials against urinary tract infections became ineffective and last resort treatments have been confirmed ineffective against Gonorrhoea in many countries.

Antibiotic resistance development is a natural process. Bacteria are under selective pressure and evolve mechanisms to avoid the antimicrobial effects of the antibiotics. Once developed, the genes for the resistance then rapidly spread even cross over between different species - a process called horizontal gene transfer. It therefore is necessary to continuously develop new antibiotics to keep up pace with resistant bacteria.

However, meanwhile the antibiotic development pipelines of pharma companies have dried out. In 1990 there were 18 companies developing new antibiotics, by 2011 there were only 4 and market approved antimicrobials have dropped from 16 in 1985 to 0 since 2010. WHO warns that the current antimicrobial crisis could bring the end of modern medicine as we know it.

The reason for a worsening of the antibiotics problem into an antibiotics crisis is a classical market failure in the pharmaceutical branch. Due to the high costs and the risky nature of drug development, there is a tendency to push for even higher shareholder revenue from a newly developed drug. Thus, there is a lack of financial incentives for the pharmaceutical industry to involve in the development of drugs like antibiotics with a small profit margin.

Antimicrobial resistance is much more a social than a technical challenge. It is a direct result of our increasingly urbanized society, fed by large scale animal farming, equiped with centralized waste water treatment, and abuse of prescription drugs. In a citizen science project called Biostrike, people around the globe could contribute to the solution of the antibiotics problem.

Biostrike was started as a science-art based educational project. The aspiration of the citizens was to highlight the problem of the post-antibiotic era, but now also aims to offer practical solutions. In ongoing projects around the world Do It Yourself Biotechnologists (DIYBio) try to find ways to hack the system to interrupt the vicious circle of antibiotic overuse, resistance development and market failure in order to avoid the threats of a post antibiotic era. Citizens explore the biological mechanisms of antibiotics resistance development and discuss its socio-economic causes and consequences. Experiments are done to detect resistant microbes from the environment and to unravel the environmental genetic highways for horizontal gene transfer through human influence, natural spread through by animals, rivers and even the clouds. Only by developing a global perspective on the problem we will be solve the global antibiotics problem.

Decentralizing and crowd sourcing the screening for antibiotics around the world could on one hand reduce the costs of research as more people would contribute voluntarily and on the other hand increase the chances to discover new compounds, as citizens of a diverse range of countries have direct access to a wide variety of ecosystems and local knowledge around the globe.

The public is invited to the workshops, seminars and talks individuals happening in biohackerspaces around the world to participate in the BioStrike challenge. High schools and communities can join in the hunt for new antibiotics and learn about the microbiology that's all around us, starting in your own backyard and kitchen and even. Several groups like the Waag Society are developing a Biostrike toolkit to empowering citizens to take action and develop new antimicrobials in this way. A collaborative online tool, a "Community Starter Kit" and a workshop format are in development to synergize efforts. At festivals, community labs, schools and universities popup events are held.

Stay tuned for the next workshop on Biostrike in the Synenergene program!