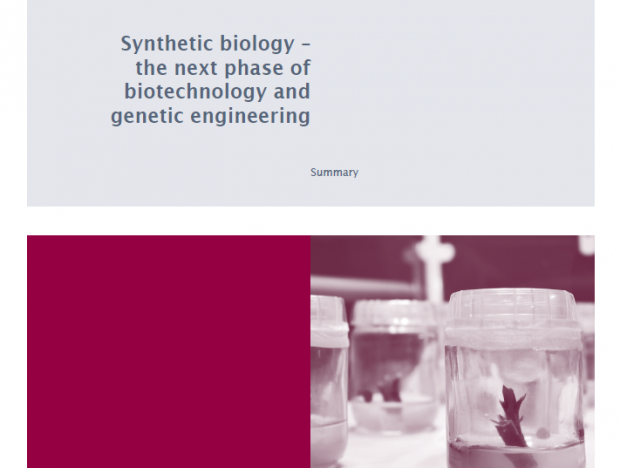 TAB, the Office of Technology Assessment at the German Bundestag, has analysed the safety and security issues of synthetic biology as well as the involvement of societal stakeholders and the general public, the role of DIY biologists and future issues and fields of action. The report no. 164 on 'Synthetic biology – The next phase of biotechnology and genetic engineering' is based on several years of analysing developments in the fields like energy and chemical production, biosensing and bioremediation, and medicine.

In addition to the German report [PDF], an English summary of the report [PDF] with the main results and conclusions is available, as well as the policy brief 'TAB-Fokus' [PDF].

In the study, a basic differentiation is introduced between synbio 'in the narrow sense' and synbio 'in the broad sense'. Synbio in the narrow sense refers to the production of cells or organisms developed from scratch and designed 'de novo', whereas synbio in the broad sense refers to approaches regarding the molecular-biological modification of known organisms which go beyond simple approaches of genetic engineering by increasingly using computer-assisted design and modelling processes. The latter also comprises techniques of genome editing and is viewed as the next phase of biotechnology and genetic engineering.

Whereas applications of synbio in the narrow sense today still have a merely visionary character, several applications of synbio in the broad sense already exist or are being developed, especially in fields like energy and chemical production, biosensing and bioremediation, and medicine. In these fields, methods and procedures of synbio have to prevail against other technological options and a shift in focus towards low-volume, but high-value products (specialty chemicals, flavouring substances, pharmaceuticals and vaccines) has been observed in the past years. Furthermore, the significance of synbio in some of these areas of application will depend on its societal acceptance, especially in consumer-sensitive fields of flavouring substances and fragrances or other ingredients for the food, cosmetics and detergents industry. With the general public still hardly aware of the development of synbio, it is difficult to predict its future prospects.

The report analyses the safety and security issues of synbio in the narrow as well as in the broad sense, discusses the involvement of societal stakeholders and the general public in the debate about the future development of the field, and highlights the special role of DIY biologists not only with regard to safety issues, but, more importantly, with regard to their input to the debate on perspectives of synbio (in the broad sense), its usefulness for and desirability in society, as well as with regard to the public's demand for real participation in the research and innovation process. The report identifies six different fields of action or thematic areas primarily for research policy, but in part also for environmental and economic policy. These range from research funding and biosafety research to involving stakeholders in the design of research agendas and in terms of citizen science as well as to dealing with issues of biosecurity and ›dual use‹ and with questions of intellectual property rights.