Recently the Dutch Rathenau Instituut published a report “SynBio Politics. Bringing synthetic biology into debate” calling for a broader opinion formation on the field of synthetic biology. This post aims to summarize and discuss the most important findings and recommendations presented in the report.

Synthetic biology is a truly converging technology, comprising different approaches derived from such disciplines as biotechnology, nanotechnology, information technology and cognitive science. Potential applications of synthetic biology can contribute to bio-economy, medical sector and provide solutions to environmental challenges. However, this technology also raises concerns in regard to biosafety and biosecurity, fair distribution of possible benefits (intellectual property and patenting). The report also states, that “[t]he use of synthetic biology (…) seems to raise a tension between notions of sustainability and naturalness that may prove difficult to reconcile” (p. 37). Broader issues associated with “manipulability of life” and the notion of “playing God” can also provoke resistance.

In order to initiate a debate on synthetic biology and try to get a sense on how such a debate may develop in broader societal and political setting, the Rathenau Instituut in 2011 organized a Meeting of Young Minds. This Meeting became a platform, where members of Political Youth Organizations (PYO) in the Netherlands and participants of the iGEM international student competition exchanged their views on potential benefits and downsides of this emerging technology, as well as its societal and ethical implications. By organizing such a Meeting of Young Minds, the Instituut aimed at addressing the missing process “of societal and political opinion making on synthetic biology” (p. 15). Such a platform for exchange of views between future politicians and future scientists was a valuable exercise, providing insights into the possible outcomes of the process of opinion formation on synthetic biology. The results of this exchange served as a basis for the report.

The field of synthetic biology is characterized by rather high uncertainty in regard to its future applications. In this context expectations and attitudes towards this technology “will be strongly shaped by basic attitudes towards new technologies” (p. 51). Basic attitudes towards new technologies can be divided into four main groups: ambassadors, who are in favor of technology; functionalists, who acknowledge the potential of an emerging technology, but also aware of possible risks and want to protect people from them, worried persons, who take a cautious stance towards technology, also finding that technology should be developed within certain limits; sceptics, finding that technological development could not contribute to social progress and “at the same time do not find it necessary to protect citizens against negative impacts.” (p. 51) Figure 1 illustrates basic attitudes of PYO in the Netherlands to synthetic biology. 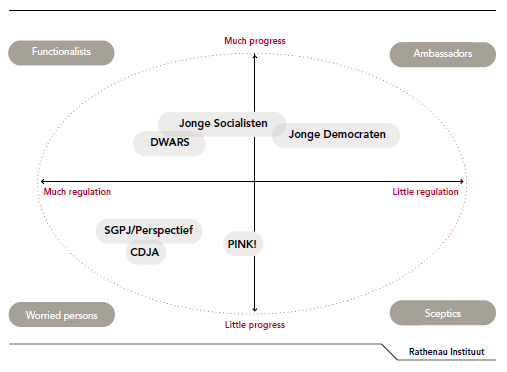 Further several key narratives were identified, which were also present in the discussions during the Meeting of Young Minds: 1. Be careful what you wish for, 2. Opening Pandora’s box, 3. Messing with nature, 4. Kept in the dark, 5. The rich get richer and the poor poorer. The report concluded that the debate about possible ethical and societal implications is not specific to synthetic biology, but rather reflects attitudes to new and emerging technologies in general.

By providing an analysis of basic attitudes and initiating exchange between representatives of PYOs and iGEM participants, the report serves as a preparation for a broader societal and political debate on the field of synthetic biology, which is still to come in the future. In conclusion, report provides a set of questions, which should be further addressed in the assessment of synthetic biology.

The key takeaways from the report are: