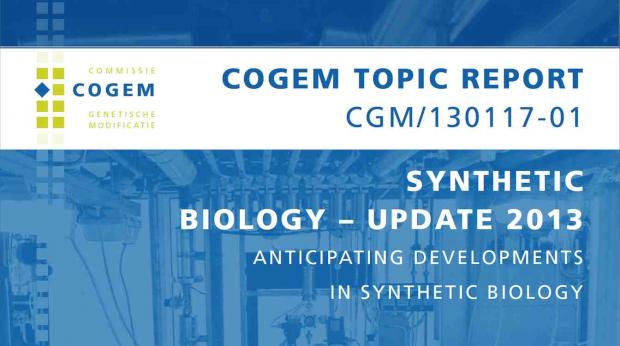 The Commission on Genetic Modification of the Netherlands (COGEM) has previously issued topic reports on synthetic biology, the first in 2006 (http://www.cogem.net/index.cfm/en/publications/publicatie/biological-mac...), and has developed activities within the Netherlands and internationally to monitor this field of research. Over the past four years several developments have taken place that have prompted COGEM to produce an update of its last report, which was published in 2008. This present report reviews recent developments during the past four years (2008–2012) and examines the potentials and challenges in each of the various sub-fields of synthetic biology. It explores how possible future difficulties with the risk assessment may be resolved. It can be downloaded for the COGEM Website: http://www.cogem.net/index.cfm/en/publications/publicatie/synthetic-biol...

COGEM concludes that the current risk assessment method is still adequate for the research being conducted in the field of synthetic biology. Should current trends continue, the risk assessment may in future be made more difficult by an increase in the complexity of the interactions, a blurring of the distinction between donor and host, and the absence of a natural reference as a framework for assessing the risks and risk perceptions.

These developments may in future lead to situations in which:
• there is no known and characterised host organism as a reference framework, or;
• the expression of the introduced characteristics and interactions with the host organism are unpredictable.

Moreover, in the short term the increasing scale and speed at which DNA molecules can be assembled may lead to:
• practical and organisational problems with the current case-by-case approach.

Researchers must provide the data needed to carry out the risk assessment when permit applications are made. As the issues under study become more complex, two-way learning processes between researchers and risk assessors will become increasingly important. Risk assessors and licensing authorities should indicate in advance the type of information that must be provided for the environmental risk assessment. The tensions between the need for practicable safety measures for research and safe working practices for genetic modification may therefore require more intensive contacts between licensing authorities, risk assessors and applicants or researchers. The government can play a facilitating role in this process by taking account of the requirements of the risk assessment methodology when drawing up research programmes.
In addition, attention has been drawn to the possible administrative difficulties that may arise as a consequence of the increasing scale and speed of new developments, leading to problems with the case-by-case assessment method currently in use. Further studies, for example into how other European or international licensing authorities deal with this issue, may throw up ideas and solutions for minimising the administrative burden of the case-by-case approach.