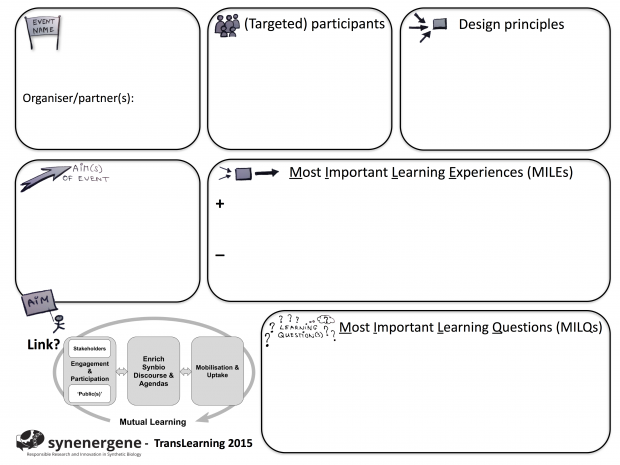 In this perspective I aim to elicit several preliminary lessons learned on ‘How to do RRI?’ from practice, which Synenergene partners have shared during the general assembly of Synenergene in Bristol, October 2015.

Since 2014, Synenergene partners all over Europe have organised numerous events about synthetic biology, targeting the 'general public' and/or stakeholders. The experiences of partners based on these efforts elicit several issues and the values of organising events in RRI contexts, which might be of use for ourselves and others ‘concerned’ with RRI in synbio or beyond.

I gathered the insights during a workshop organised with the Dutch partners of Synenergene in Bristol, autumn 2015. The session was aimed at facilitating mutual learning between partners, and therefore named ‘TransLearning’. Building upon previous TransLearning projects done at VU University in Amsterdam, we designed a ‘TransLearning canvas’ (see on top of this page), which was meant to help partners in the elicitation of their learned lessons. The canvas follows (more or less) the principles of ‘reflective practitioner-ship’ (Schön, 1983), namely an iterative reflection on goals, actions taken, lessons learned and formulation of new questions, plus the defining of new objectives and actions in order to answer these new questions. We inspired the partners to undergo the TransLearning steps as on the designed canvas, by presenting the lessons learned among the Dutch Synenergene partners. Our presentation can be found here. Thereafter we asked Synenegene partners to individually describe on a canvas their own:

I digitalised the words that partners wrote on the 24 canvasses that they filled out, which resulted in an analysable dataset.
Since Synenergene is about organising engagement and participation of stakeholders and general citizens in synbio, as well as enrichment of the synbio discourse, agendas, and uptake of these in various communities, the preliminary Synenergene lessons learned inherently cover insights on all these levels. My summaries below will proceed to detail this. Still, I clearly see that the Synergene experiences are ‘young’. The consortium runs for ± 3 years now, which means that the current most predominantly learned lessons are on a more concrete level, such as “How to do adequate event facilitation?”. Lessons linked to RRI in synbio or beyond are about to come, I foresee in June 2016 or August 2017.

For a bit of context, let me share some ‘numbers‘ about the data first: 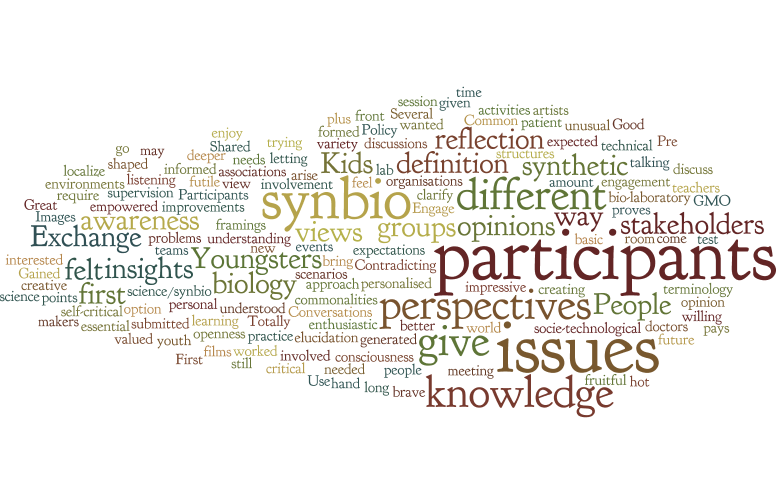 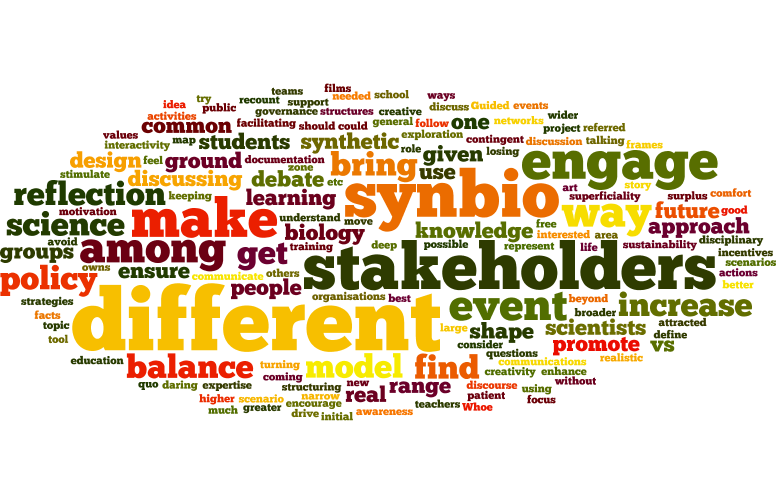 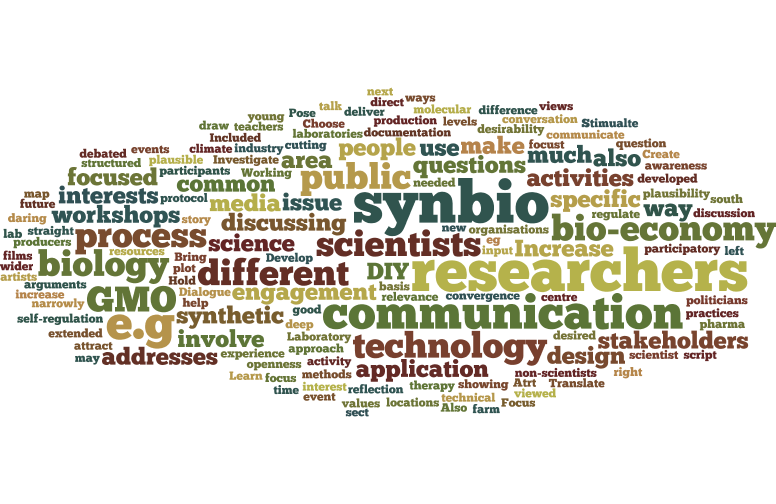 How would you interpret these Wordles? Do not hesitate to let me know what you think....

Below I will tell more about the MILEs and ITAs (see canvas explanation above) that partners formulated in a qualitative manner.

I understand this desire very well. We have to balance between covering the complexity and interrelatedness of synbio related topics (that we foresee as all relevant to discuss about), and the fact that we also have to make it for event participants ‘easier’ to imagine what is being spoken about. Another thing about being focused versus more generic, concerns the complexity of inviting and getting people to participate. Both specific and generic forms of events can be experienced as ‘beyond my scope’ among particular stakeholders, as well as among citizens. Citizens may have never heard of synbio, while stakeholders do not name their practices as such (> too focused). And when the event would get a name like ‘Come and think about our society of the future!’ (> a pretty generic one), it is rather strange that ‘suddenly’ synbio comes up as focal topic to talk about. Expectations need to be managed after all.

Further answers on ‘what focus works best’ need to be found still. Yet I would like to stimulate partners to explicitly and very clearly define (before each event) What is the impact that I want to achieve? and link that clearly to (the) overall Synenergene aim(s); or aims of RRI. It might help in finding the right focus, finding a good event title, and targeting particular relevant and interested participants.

2. Many partners reported to have experienced problems in (finding formats for/doing adequate) facilitation during events. For example, various partners reported about struggles to get participants in a mode of thinking about (imaginative) futures and letting them go beyond 'usual routines of reasoning’. Also, partners mentioned the challenges that arise when there are (huge) knowledge differences between participants (e.g. generic versus specific), etc. On the other hand, several partners mentioned (e.g. as ITAs on the canvasses) options and desires for future collaborations with iGEM teams, the use of iGEM application and techno-moral scenarios, and/or the use of Biofiction movies and other playful formats developed within Synenergene.

I foresee that the current tools developed within Synenergene may help in overcoming these difficulties on the (practical) level of facilitation in the upcoming years. I have seen many Synenergene tools that are creativity stimulating and therefore have the potential to enrich the (mostly verbal) conversations of our future events. Dive into the resources page and use them!

3. The continuity of the networks/interactions initiated by Synenergene partners after the funding stops, seems another aspect that many partner worry about. So the 'sustainability' of Synenergene, its base of events, networks and other activities are aspects to keep thinking about.

By summer 2016, I hope to tell you more about what we learned about this.
Warm regards,
Marjoleine Georgette van der Meij - m.g.vander.meij@vu.nl