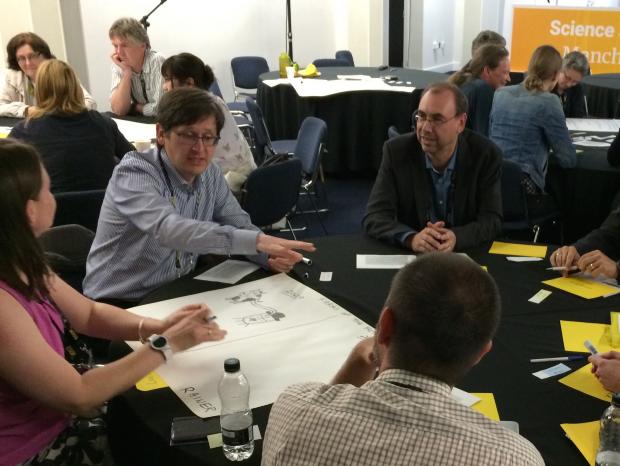 At ESOF2016, Synenergene organised a reflection session on synthetic biology in collaboration with SYNBIOCHEM Manchester, titled “Synthetic biology and the new bio-industrial revolution” (http://www.esof.eu/the-programme/event-information/synthetic-biology-rev...). Hereby a little report and short reflection on the notions shared during this workshop.

On invitation of SYNBIOCHEM, four cutting edge scientists involved in the field of synthetic biology outlined their on-going research followed by short Q&As. Thereafter SYNENERGENE hosted a break out session for reflection and imagination on the speakers’ work. Each speaker sat down at one table with about five other conversations partners from various fields (science, industry, policy, journalism, etc.). We asked the tables to focus on particular questions. 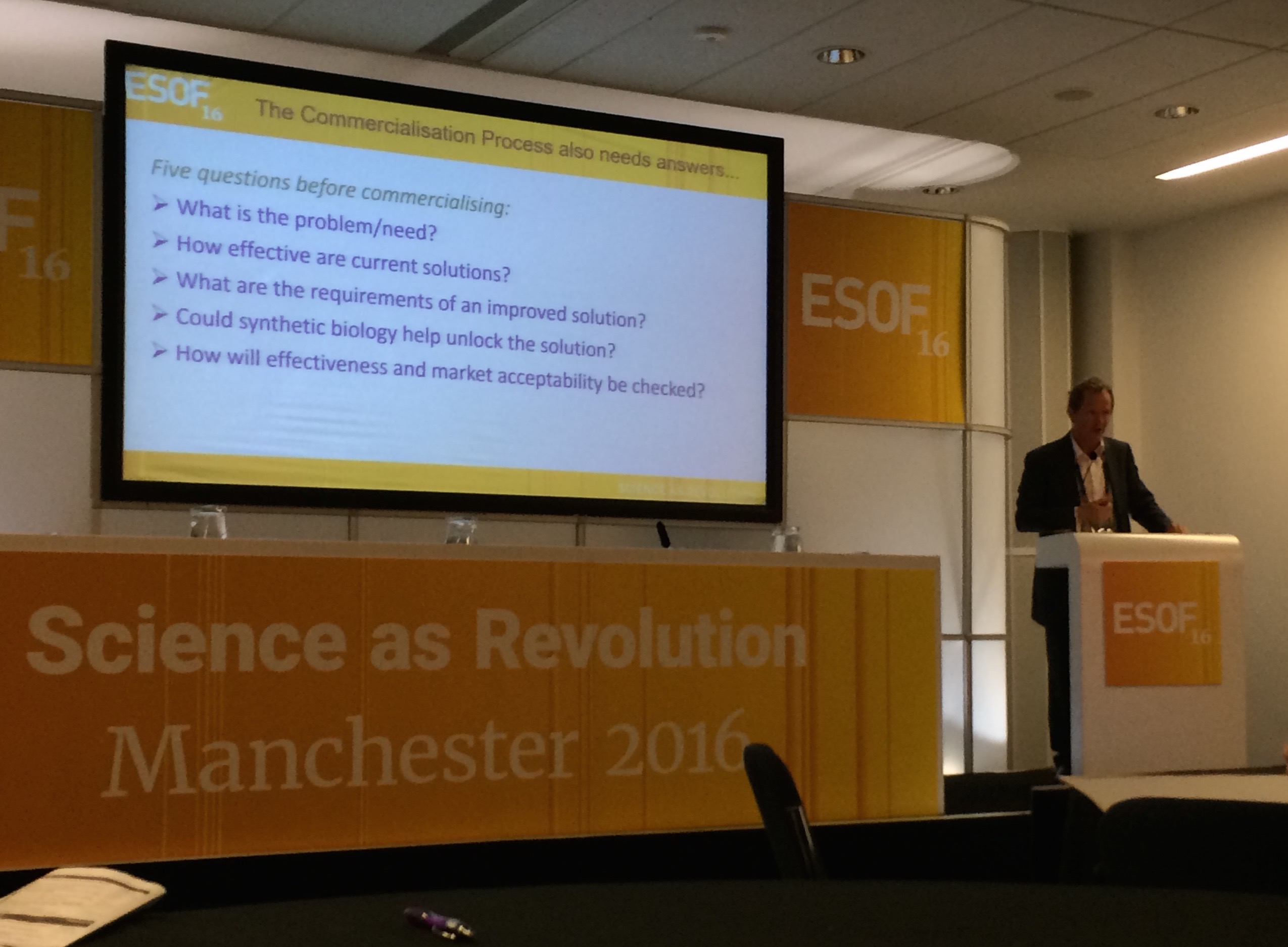 On the photo: Lionel Clarke on RRI in his presentation (http://www.esof.eu/speakers/speakers-details/lionel-clarke.html).

Martin Warren (http://www.esof.eu/speakers/speakers-details/martin-warren.html) kicked-off with a presentation on bio-synthesis and compartmentalisation. He showed his work on the development of bacteria for the production of vitamin B12. He quickly pitched the idea to integrate this in plants, helping people with no diary intake (e.g. for allergy reasons or vegan motives) to get their healthy dose of B12. Furthermore, Martin glanced over his work on organisms for the purpose of sustainable energy solutions, e.g. by photosynthesis or methane gas production. The conference room, filled with about 60 attendees, seemed to need a warm-up for the Q&A, but one lady asked whether Martin’s bacteria could be used for drug production too; which Martin confirmed with an convinced YES.

George Chen (http://www.esof.eu/speakers/speakers-details/george-guo-qiang-chen.html) blew our minds with numerous visualisations of his work on plastic-producing bacteria. To show what it takes to create bio-plastics, George took us on a journey through the challenges he tries to tackle with his Halophilic bacteria. For example, could bacteria be enlarged, with an enlargement factor equal to the ratio between a Ping-Pong ball and a basketball, so that they can produce more? The attendees merely had technical questions during the Q&A, e.g. about the use of non-human haemoglobin in this process, and George happily received an idea from an attendee on making a catalyst in his bacteria for more efficient production.

Rainer Breitling (http://www.esof.eu/speakers/speakers-details/rainer-breitling.html) was a bit more visionary in his presentation, talking about the use of microbes to create all sorts of chemicals. He introduced the attendees with iGem, Biobricks, bio-programming with computer software, microbial factories that can ‘print’ organisms, and the ‘debugging’ that might be needed in these processes. Rainer also made a call for the allowance of ‘playing’ in the microbial factories and refrainment from too much focus on application-based work on synthetic biology.

As last but not least speaker, Lionel Clarke (http://www.esof.eu/speakers/speakers-details/lionel-clarke.html) presented his work done on road-mapping the synthetic biology field. Based on his experiences, Lionel showed several questions for researchers in the synbio field, concerning the reflection on purposes and ideals. Also, Lionel emphasised the major question in society, being ‘Can we trust a scientist?’, and therefore the need to engage in reflection and transparency in communication. A clear indication that Lionel gave us is the need to strengthen the horizontal dialogue between heterogeneous stakeholders and the wider social context, thus to face the plausibility, rather than the desirability of some techno-scientific advancements.

After this broad spectrum of presentations, each speaker sat down at a different table to engage in a conversation with the attendees about their work. We asked them to take a listener-role. SYNENERGENE provided ‘golden rules’ and a workshop format. The conversation participants had to select a table facilitator and note-maker, to guard attention for diversity and reporting of the ideas, concerns, and visions that were shared. After an introduction round, the tables had to select one synbio application domain, which could be related to the speaker sitting at their table (medical / health, agricultural / environmental, chemical / bio-industry, or other, e.g. computational storage). With the help of value cards*, participants shared their initial thoughts concerning one synbio application domain of choice. Thereafter, we provided the table facilitators with three dialogue questions**, related to their speaker. If the time allowed them, we also asked tables to imagine the future of synthetic biology, guided by an imagination question**. In the end, the tables presented a wrap-up of their conversations to each other. The synbio researchers were asked to respond to the wrap-up too, relating the conversations to their own work.

The table of George Chen, appeared to have a conversation in which the participants developed rather consensual notions. They reflected on questions concerning the need of bio-plastics and potential dangers of release of ‘synthetic bacteria’ in the environment. Also they imagined the potential influence of synbio in the near and further future. According to George, the table was willing to take the potential risks that come along with ‘synbio bacteria’; also concerning that release in the environment would ‘kill’ the organism after all. 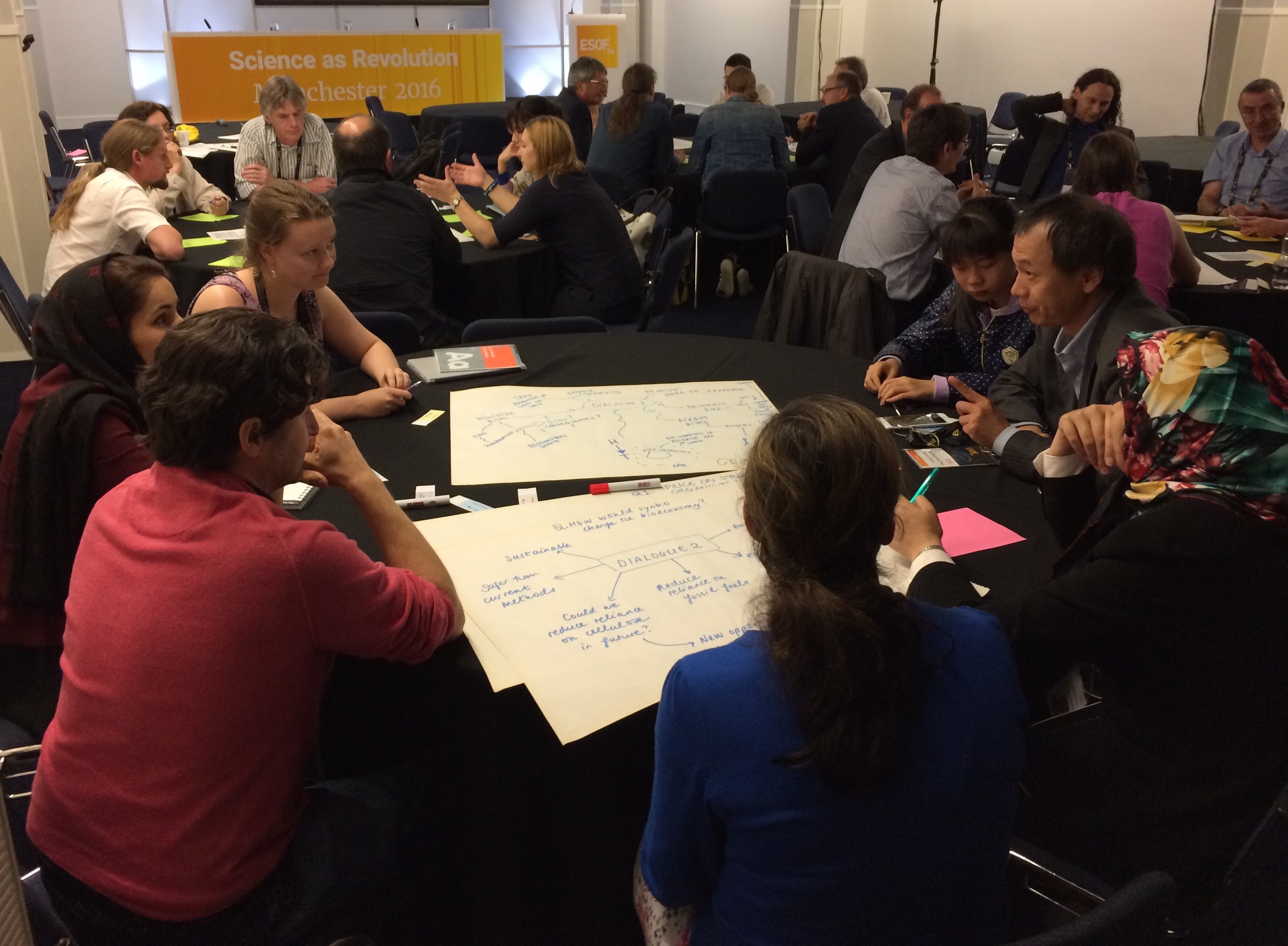 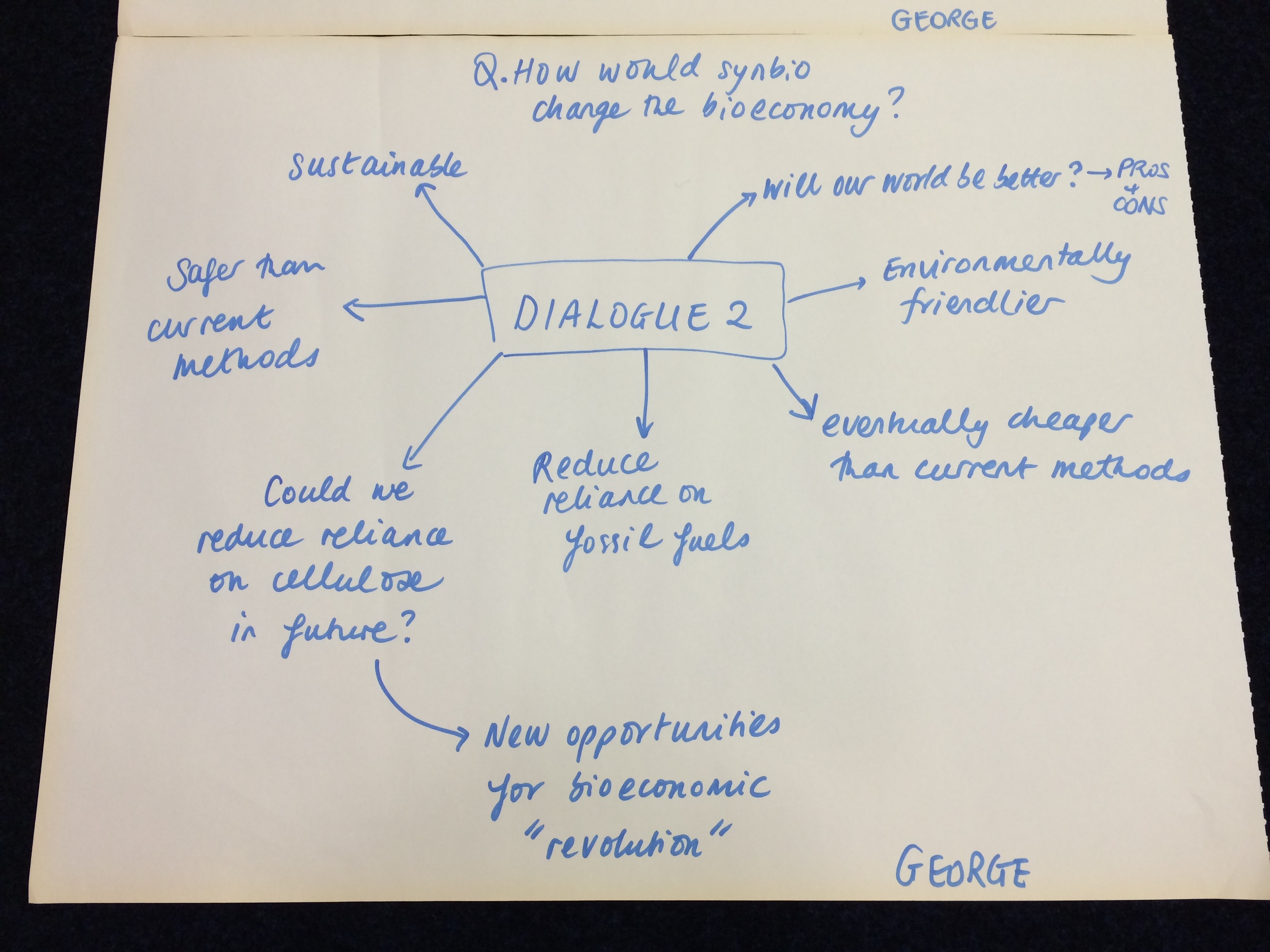 On the photos: the table of George Chen and their notes on an imagined future based on his work in synbio.

The table of Martin Warren surely was the most technical and dynamic table. The conversation was directed to unfold the complex ethical and moral controversies emerging by the possible implementation of some biomedical technologies shaped in the field of synthetic biology, such as the genome editing. Starting from the discussion on the controversial dimension of synthetic biology, participants reflected on the technoscientific reshaping of some crucial notions and dichotomies, such as natural-artificial, or human-cyborg, highlighting how the technical and the social are increasingly fused together.

Amongst others the table also discussed ’the meaning of being ill’ once health improves by personalised medicines and genomic technologies with the help of synthetic biology. After the plenary sharing of notions, Martin could conclude that thinking and talking about the potential impacts of his work on the meaning of being ill, seems to have become very urgent, since applications are almost feasible already.

The table of Lionel merely addressed questions concerning citizen engagement, coming to the conclusion that it will not be realistic to involve ‘all’ citizens in the development of synthetic biology, even if one would like to do so. However, they foresaw that new ‘business models’ like crowd funding could change the influence and involvement of citizens. The group did not foresee a big impact on the global economy or full world population due to synthetic biology, but a possible drastic change for some populations, in the near of further future.

Last but not least, the table of Rainer Breitling had paid great attention to the imagination question “What would the farm of the future look like? And what would Karl Marx think about that?” The table came up with a vision of a farm by 2020 and 2050. The former concerns a cow with an outlet that is immediately used to produce all sorts of foods, using a ‘fermenter with synthetic organisms’. The 2050 vision comprised a toilet (as we all have in our house), connected to a super-synbio-machine that can produce all sorts of food straight away out of our ‘outlet’, without ‘interference’ of a farm or any labour. Rainer showed enthusiastic puzzlement regarding these visions. He considered them as interesting, but would himself not aim to replace farms completely by means of his work on synthetic biology, concerning that the world should not change too much. Rainer expressed a hope that farms of the future still can provide labour. 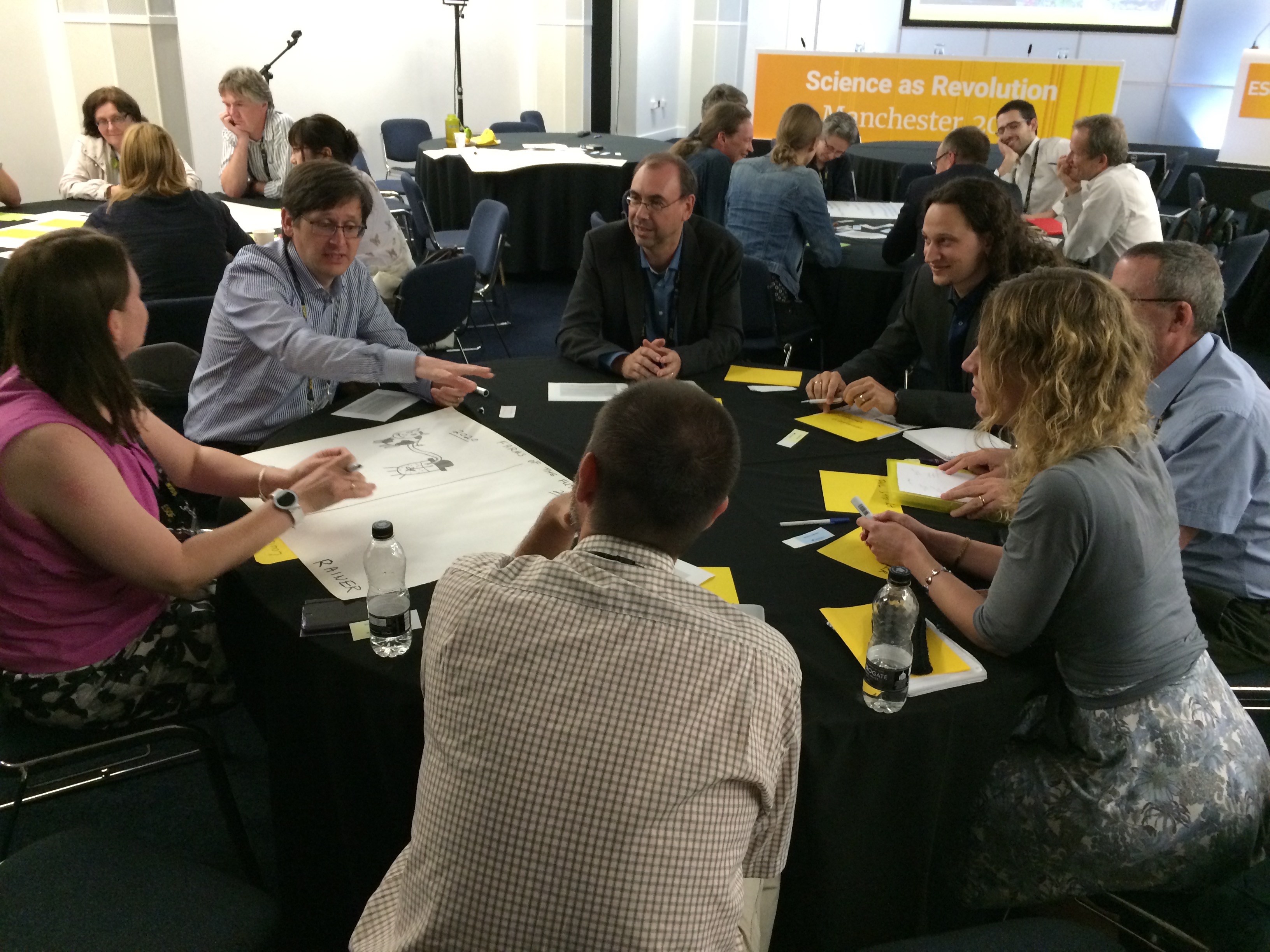 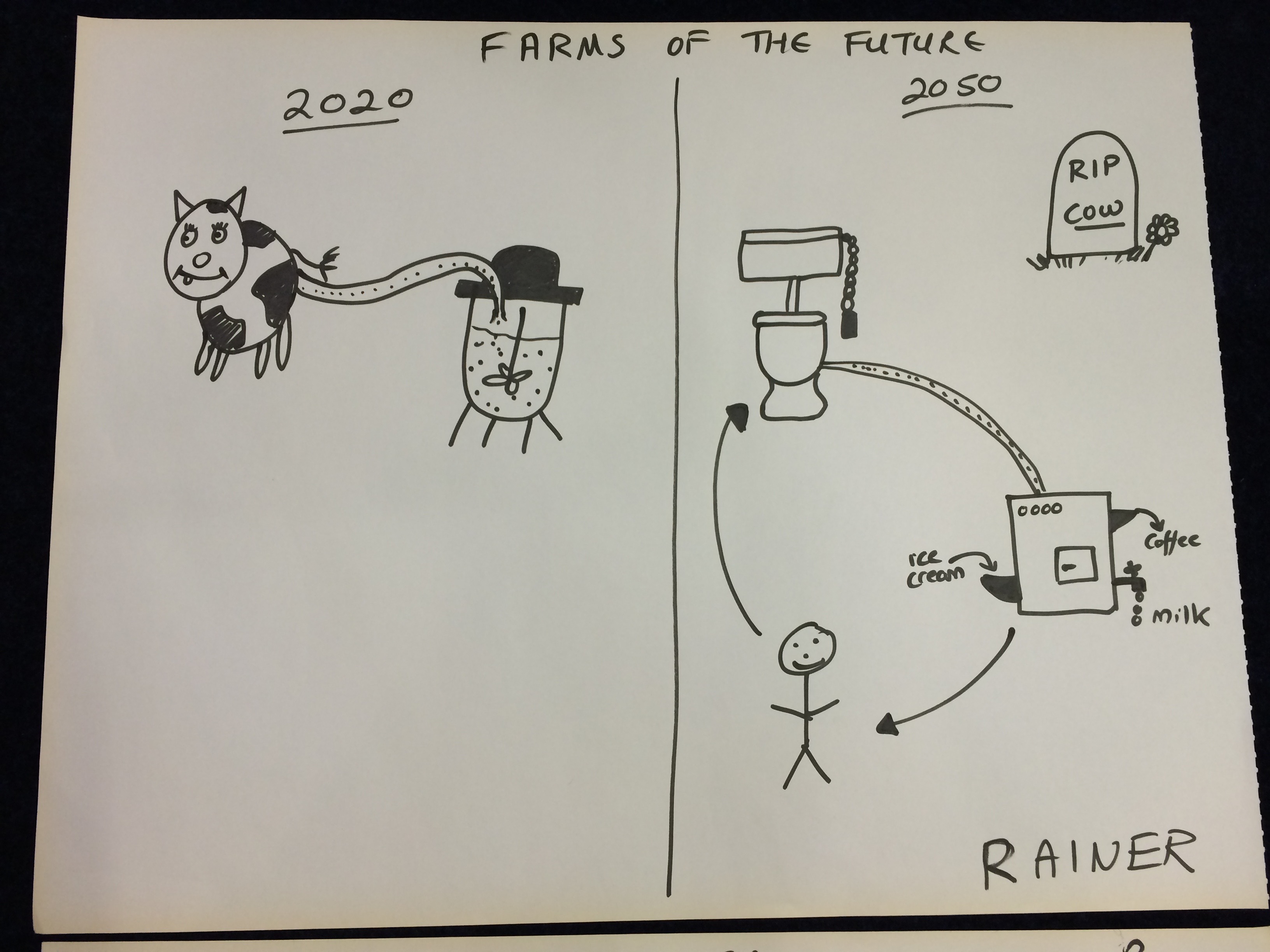 On the photos: the table of Rainer Breitling and their imagined near and further future. Note that Rainer did not want the future to be like this, though... Still it supported the group to engage in deep conversations while having fun!

Having done this session, we realise how hard yet lovely it is to facilitate heterogeneous reflection on synbio. Of course the regular issues of engagement come-up, such as researchers ending up ‘monologuing’ to the conversation participants once questions can be answered in a technical way. Yet, although the imagination can become somewhat “surreal” and thereby overstretch the scope the researcher’s work, it seems to help researchers in showing us to what kind of world they want to contribute, and NOT. We believe that such transparency on purposes and dreams is the key to further societally robust development of synthetic biology in the end.

Therefore, we are happy to organise these conversations “in the wild” and we truly hope research institutes, individual researchers, and dialogue organisers will still make them happen in ‘after-SYNENERGENE’ times.

* The value-cards addressed the following values (and assumptions):

** Lists of questions given to the tables (per speaker).

Generic imagination question that each table could do in case they felt uncomfortable with their table-specific question: